Puppet Place associate artist Katie Underhay is a designer, maker and performer for theatre.  She is also co-artistic director and founder of Peafrog Puppetry.  She and Anthony Burbridge create compelling and original theatre for audiences of all ages. Peafrog Puppetry undertake private commissions for other artists and performers as well as delivering flexible puppetry workshops to various education establishments and theatre groups. 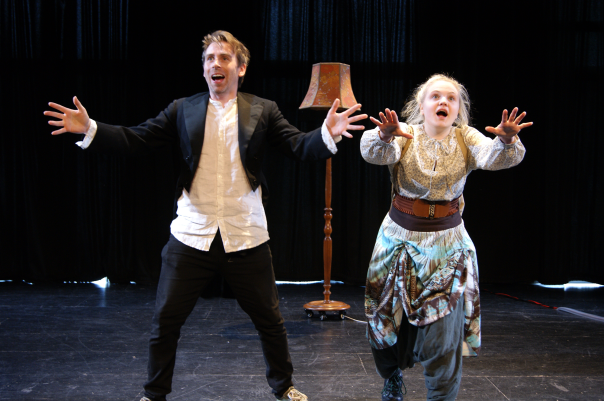 Hi Katie, thanks for taking time out to give us this interview. Can you share with our readers how you came to be doing what it is that you do? 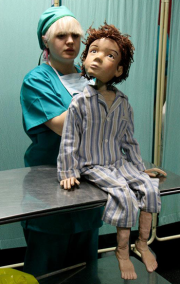 Yes, of course. After initially studying at the Wessex Academy of Performing Arts I started a Musical Theatre degree. I realised that the course wasn’t right for me, and maybe even that career, so I jumped ship to study Theatre Design at the Royal Welsh College of Music & Drama with the intention of focusing on costume.

At the end of my first year, I played the lead in the college’s puppetry performance called The Boy Who Went Fishing For Compliments which caused me to realise that the combination of design and performance working with puppets gave me, is where I wanted to be as an artist.  Then at the end of my second year I was asked to step in as a last minute replacement for a show going to the Edinburgh Festival. Written and created by Jonathan & Tony Leach, the show was called King Kong the Musical. I had only two days to learn the show before our first preview! It was scary but exciting and it was an amazing, never to be forgotten experience of the festival and a fantastic show. It was also nice to step back into the world of musical theatre.

By the time I reached the end of my third year I was able to submit as my final project – a puppet, murder-mystery musical called Murder at Monishing Manor. I conceived, designed, built the set, wrote the songs and scored the music for a cast of 9 puppeteers and six live musicians. That was when Peafrog Puppetry came into being. 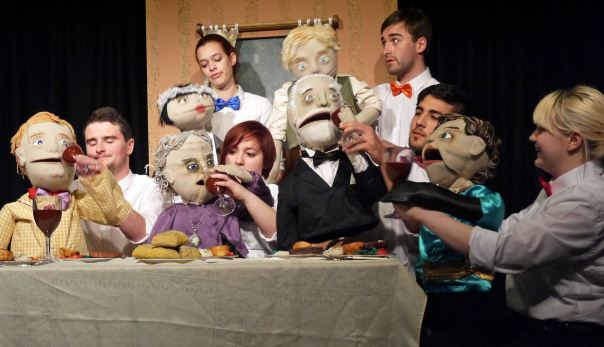 Wow, that would be the culmination of a lifetimes work for many people. Such a complex and challenging show must have been really demanding. How did you cope with everything?

I loved working on ‘Murder’ but it was hard to do so much alone. It’s easier to cope with things you love doing, but you’re right, it was very demanding. Since graduating I’ve worked on lots of projects with some amazing people, which is so much nicer than going it alone. I am lucky enough to be in 3 Little Pigs with Stuff & Nonsense which I’ve performed 92 times since December 2015, including an amazing 7 week stint at Plymouth Theatre Royal. I’m very much looking forwards to hitting the hundred shows mark in London in October, and then perform the show in Ipswich over the Christmas period.

You have a new show at the moment, ‘The Tale of the Cockatrice’. How’s that going?

Oh, better than we could have hoped. We have just had our ‘world premiere’ at the fantastic Midsummer Dreams Festival in Dartington, Devon and we got some brilliant feedback from audiences and the festival organisers. We are looking to further develop the show and take it on tour in 2017. We have the small hurdle of funding to overcome and will be applying to the Arts Council, as well as asking people to help support and promote our show in any way they can. 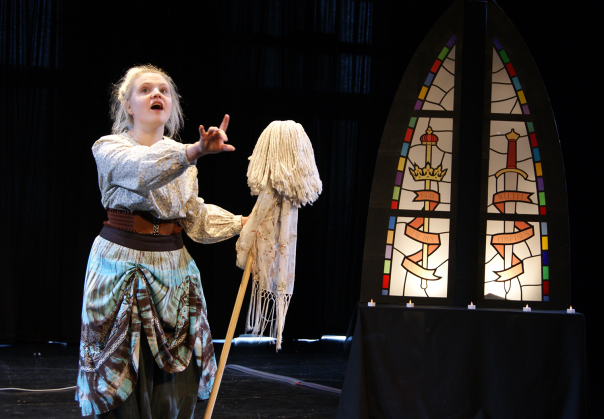 Is there any specific way in which readers of the Puppet Place newsletter might be able to help?

Well if anyone can give us a heads up on festivals or venues which we can include in our tour plans, let us know of any funding opportunities they think we might be eligible for, of just help promote our show on their social media that would be amazing!

One final question, looking back on your last few years experience, what advice would you give your younger self or to others wanting to have the success you have?

Be selective in the things you do for free. It’s a great way to network and the experience can be invaluable but don’t sell yourself short.  Be tenacious and keep applying for things, even if they are not quite what you want or think yourself perfect for. Each application could open the door to other connections and opportunities.If you can’t find someone to employ you, employ yourself! Get a group of people together and create something. I’ve done a lot of that!

Thank you so much Katie, good luck with the show and the tour.

Peafrog Puppetry create compelling, original theatre with the aid of oddball puppets, live acoustic music and general tom-foolery! Based in the South West of England, they create and design bespoke puppets for stage and screen and run interactive workshops, providing puppetry tuition in theatres, colleges and drama societies for toddlers, teenagers and even grown-ups.  Find out more on the website.

Puppet Place Associate Artist Scheme: Offers a range of benefits to artists including: discounted tickets to all Puppet Place events; reduced rates for rehearsal and fabrication space hire; dedicated training and skills sharing; the latest job/funding information and promotional services via our online network; and a forum to exchange ideas and connect with other artists.  To become a Puppet Place Associate Artist, contact Rachel at  Rachel@puppetplace.org or phone on  0117 929 3593.