Rémi Brissaud is a self taught stop motion artist from France and Resident Artist at Puppet Place.  He has produced a range of works including commercials, short films and music videos.  We sat down with him to chat about how it all began, what brought him to Bristol and his latest stop-motion film short, a tribute to the late rapper Tupac Shakur.

What’s your story?  When and why did you get involved in stop motion?
I got into stop motion when I was thirteen.  I’d watched Nick Park’s movie ‘A Grand Day Out’ and ‘King Kong’ (the first film) and I asked myself, how did they do that?  How did they achieve the techniques?  So I read books, as there was no internet at this time, and I discovered stop motion animation.  I started in my room with a webcam and some Lego.  I improved my skills, year after year and now I’m here.

You mention Nick Park as an inspiration.  What other artists have inspired you?
George Romero, because I really love zombie movies and horror movies.  Fritz Lang, because he was such a great artist.  For me he was one of the first directors to have a huge message in his films.  Adam Elliott also, the Australian animation director and Adam McKay, the American director and comedian.  He’s a very funny guy.

What projects have you been involved in?
Six years ago, I was living in Paris and working in a stop motion studio.  They helped me to produce five of my movies.  I worked for 27 hours non-stop once, just to make a short sequence.  I also made a homage to Alfred Hitchcock’s ‘Psycho’ in black and white.  It was a commercial intended for screening in movie theatres.  I also made a homage to ‘King Kong’ for the eightieth birthday in 2013.  I also made four movies to mark centenary of the First World War, ‘The Great War’ and last September I made a music video for a rap artist.  I’ve also been working on a short story for children over the last four years, producing the story, which I hope to get commissioned.  And right now, I’m working on another homage to the rapper, Tupac Shakur to mark the twentieth anniversary of his death.  I like to keep working on projects, even if they are just short things because I think in this Internet world you have to keep showing your works, so people don’t forget you. 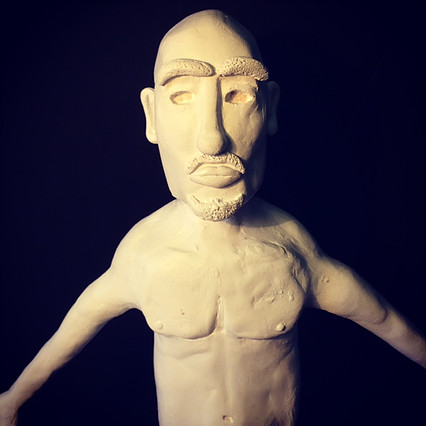 How have you funded your filmmaking?
It is mostly out of my own pocket.  In France we have a work scheme for the unemployed to develop skills.  You work 500 hours over a ten month period and the French government support you.  I used this scheme to support myself as an animated filmmaker.  I also work as a lighting technician in the film industry.  I invest this money into my independent filmmaking, I don’t have a producer or government funding unfortunately – maybe one day. 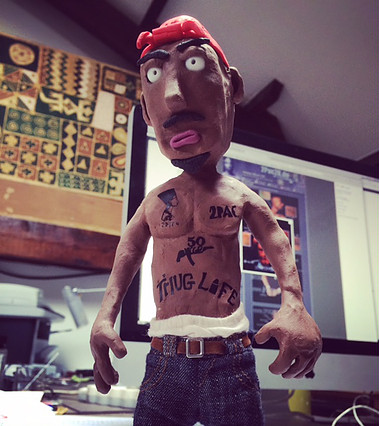 Can you tell me about your most recent project, the Tribute to Tupac?
Sure.  I’ve used the ‘Changes’ song as it’s quite ironic because he speaks about dying in the street – the violence in the Middle East and on the streets in the USA.  And the song finishes with him saying ‘one day a guy will come up to me and shoot me in the back’ and this is how he died.  It’s short, only one minute and twenty seconds.  It’s just a film for all the fans of Tupac and the people who love his music.

What brings you to Bristol?
Well, it is kind of my childhood dream to work with Aardman Animation.  I think about Bristol as a place I would like to live one day.  My girlfriend had an opportunity to work in England, so we decided to come to Bristol and discover the city.  We’re not drawn to London, it’s too big.  I lived in Paris but I found it too crowed – too many people, too much pollution and not enough parks.  Bristol is an amazing town with a lot of artists, places to relax and green spaces… Not so sunny, but this is England and I’ve become used to it (smiles).  It’s good to be at Puppet Place, I really like this place but someday I hope to get my chance at Aardman.  Well, we will see!

To find out more about Rémi’s  work, browse his portfolio and see exclusive ‘making of’ photos, visit his website: www.remi-brissaud.com

Based in the heart of Bristol, Puppet Place offers workspace for artists and creatives including puppeteers, prop makers, graphic designers, animators and filmmakers. Benefits of becoming a resident at Puppet Place include a profile on our website, advice and information, discounted rates on hire rates in the fabrication and rehearsal studios and more.  To join us, contact Rachel McNally at rachel [at] puppetplace.org or call 0117 929 3593.