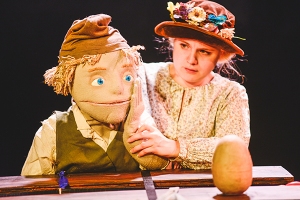 We wrap up our series of articles following Puppet Place Associate Artists as they get their work in production and out on tour with a review of an incredible year by Katie Underhay from Mumblecrust Theatre, as she reflects on how far her now award-winning show, The Tale of the Cockatrice has come in just twelve short months – from scratch performance to UK tour.

You’ve had quite a busy year in 2017.  What have been the highlights for you?  Have you met your goals or even exceeded your expectations?We certainly have! This time last year we did our scratch performance of The Tale of the Cockatrice at the Lyric, Bridport, to try out new ideas and get feedback from kids and parents about what is working, what else they’d like to see, etc, which we took on board ready for the new year.  In 2017, we wanted to take the show to Brighton and Edinburgh Fringe.  We knew that it would be an incredible amount of hard work and cost an awful lot of money.

So we set some very specific aims: get some reviews and press/industry feedback; invite programmers from venues and touring agencies to get our tour up and running; to have these two big festivals in our show and company’s history and to promote our show and company’s name with audiences. It’s safe to say, we certainly achieved those things. Our absolute highlight this year, which came as a total surprise, was winning our two awards at Brighton Fringe: “Voice’s Best Newcomer” and “IYAF’s Best of Brighton Fringe: Children and Families Award”. That certainly ticked our ‘press/industry feedback’ box, as did the 5-star review from The Voice! After our success in Brighton, it was much easier to approach programmers to see the show in Edinburgh and we had quite a few come along and book us for 2018!

What are your plans for the Christmas/New Year season?  What’s special about this season?  How will you spend Christmas Day?Christmas is always a busy time for us but this year is even crazier! Up until Christmas Eve, I’ll be performing in Stuff and Nonsense’ 3 Little Pigs at the Lighthouse in Poole. We were approached by Theatre Shop, a venue very close to home in Clevedon, North Somerset, to perform The Tale of the Cockatrice a few days before Christmas. I was quite frankly gutted because I knew I’d be away at that time. Thankfully we managed to rearrange to the 28th & 29th December, so that week is going to be insane!

Finishing off the 3 Little Pigs run, travelling back to my family in Banwell for Christmas and Boxing Day, then two days later performing our show the first time since Edinburgh in August! We’re so excited to be performing the show in Clevedon. It’s the first time we’ve brought it to North Somerset, my home county – and Clevedon is the town my mum grew up in!  So it’s very close to my heart.  It’s also the first chance a lot of my friends will have to see the show. One of my oldest friends from the drama group I went to as a kid, a friend from my Performing Arts BTEC, my cousins and their children, even my GCSE drama teacher!  I’m really looking forward to it.

What plans do you have for the New Year?  What would you like to achieve?  Do you have any resolutions?In 2018 we’d really like to take this show all over the country and keep promoting for 2019. We already have tour dates in London, Cheltenham and Hertfordshire; we’re going back to Brighton Fringe and we’re returning to the Lyric in Bridport with the finished show and a puppetry workshop. I don’t think we’ve come up with any resolutions yet, but a lot of plans; some things we need to implement and some crazy ideas that might come to pass.  We’ve been talking a lot about plans for a new show but I don’t know if 2018 is the year for that.  2017 has been full of surprises so I couldn’t even speculate what’s going to happen next year!

What advice would you have for artists who might be anxious about trying to get a puppetry show produced and on the road?

We really didn’t expect the kind of reception we got at Brighton Fringe. And from then all the things we were struggling to get (dialogues with programmers, press coverage) became so much easier.  It really has been a kind of snowball effect. Getting that first bit of recognition was so important for a new company that doesn’t have many contacts within the industry – yet!

When we started, we had a vague idea to do a family show about this old cockatrice myth and decided that we’d apply for every festival we found until we got accepted.  Then we’d create it.  This was what we really needed to get ourselves moving but was a stupid idea at the same time! We got accepted by the first one we applied to, we didn’t have nearly enough time and we were getting more and more elaborate with our ideas as time started to run out.  So I think the advice I’d give to people would be to find that “deadline” so that you have a goal but to give yourselves plenty of time. Within a week of being accepted, we were being asked for a logo and marketing copy (for a show that didn’t yet exist) and then were being asked for risk assessments, posters, flyers, press releases and a thousand forms to fill out.

Never underestimate the amount of admin there will be and make sure you make time for it. And don’t let yourselves be rushed with the creative side! Also remember that there really is no deadline for the show to be perfect. We’re still coming up with ideas to improve the show, a year and a half after we started and 6 months after we got a 5 star review! We also have a lot of friends who have their own companies – some a few years ahead of us, some 10 years ahead of us – and these people were invaluable for advice and support. We’ve been sent example versions of press releases and tech riders and all those sorts of things you don’t even know you’ll need until you’re asked for it!

We’re very much looking forward to creating our next show, taking on board everything we’ve learned this time around, and every festival and venue we go to gets easier and easier, because we already have these important things in place.

Don’t miss ‘The Tale of the Cockatrice’ at the Theatre Shop, Clevedon, North Somerset on 28th and 29th December 2017 (performances at 11am and 2pm.)  To find out more and book your tickets, visit the Theatre Shop website.

Read the full story about the development of ‘The Tale of the Cockatrice‘ in previous Puppet Place News Blog interviews with Katie Underhay ( August 2016 & June 2017.)  Find out more about Katie’s work and Mumblecrust Theatre at their website: www.mumblecrust.com  and join them on Facebook for the latest news.

Puppet Place Associate Artist Scheme: Offers a range of benefits to artists including: discounted tickets to all Puppet Place events; reduced rates for rehearsal and fabrication space hire; dedicated training and skills sharing; the latest job/funding information and promotional services via our online network; and a forum to exchange ideas and connect with other artists.  To become a Puppet Place Associate Artist, contact Rachel at  Rachel@puppetplace.org or phone on  0117 929 3593.

2 thoughts on “Associate Artist Spotlight: An Interview with Katie Underhay”