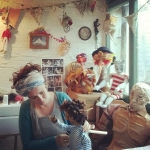 Jacqueline Avery is the Artistic Director at The Makeshift Ensemble in Dorset and a member of the Alzeimers Society’s two million strong army of Dementia Champions and Dementia Friends.  She is also a Puppet Place Associate Artist.  It was therefore an honour for me to interview Jacqueline, and find out more about the new dementia themed show she is currently working on.

Jackie is a choreographer, performer, puppet maker, teacher and a full time mum to boot. I caught up with her during rehearsals for her two current projects, Sofa, a dementia themed show and associated workshops she devised  together with her co-creator Laurence Aldridge, and their new children’s puppet show, The Children In The Moon, planned for 2018. Sofa has been supported by the Arts Council and is being made in partnership with Everyman Theatre in Cheltenham and Heartbreak Productions.

Hi Jackie, thanks for agreeing to this interview. May I start by asking what came before Makeshift Ensemble in 2015?

My training is largely in physical theatre and contemporary dance and working with the body to create story and image.  After graduating from Plymouth University in 2005, I was fortunate enough to cut my directing teeth under the mentorship of Kneehigh Theatre writer Carl Grose for the Jonah Lie Project, a collaborative piece performed with core Kneehigh members at The Hall for Cornwall more than a decade ago. There followed stints with Quicksilver Theatre (in association with Lighthouse, Poole) and some workshopping and choreography with Marc Bruce. I helped re-imagine Shakespeare with Tim Supple and most recently I have worked with physical theatre pioneer David Glass, learning about the nature of creative practice and how to embed this into my work. Since then have I worked as a performer, director and teacher across the UK.

MakeShift was formed in 2015 after a stint of writing and directing for other touring companies. I decided to bite the bullet and establish my own ensemble with Laurence Aldridge, a wonderful actor-musician who performed in a reworked version of The Tinderbox I had written.

How did puppets come to be such a large part of your work ?

Puppetry has always fascinated me, there’s something about the in-between world they inhabit and our ability to invest our stories and deep rooted feelings in them. For me, working with them is a natural progression from performing with my own body.  It is a dance expressed through another channel.  I never design my puppets before I start making them, I let them do their own thing and tell me who they are, then there is a brilliant moment when you can greet each other for the first time!

Your new show Sofa explores the world of memory and dementia. Where did the idea for this show come from and how did you set about making an idea into a real thing?

The idea sprang from tidying up after my children! They used to destroy the kitchen sofa regularly when creating dens, boats, cars etc. out of it. I started to think about when and why we lose that desire to play as we grow, and what roles a sofa plays as we go through life. It becomes a place to rest, talk, entertain, make love and to comfort, as well as a treasure chest of loose change and things you thought you’d lost forever.

That led me to thinking about memory and how we choose to remember. Our brains can do a million things with memories including completely rewrite them, and the differences between shared memories can be astonishing. Sofa explores that idea a lot. From here there was an organic progression to exploring dementia, not necessarily as an illness but simply another way the brain chooses to process memory. This isn’t to say we don’t deal with the realities of living with and caring for those with dementia, it’s important not to skim over that, but the focus is on the role of memory and ‘unmemory’ and what it means as we grow.

To explore this in performance we had a bespoke sofa made that is essentially the stage from which we tell the story of two siblings whose father had dementia, the sofa holds many secret compartments and is used to make other worlds just as we do as kids. The sofa is the constant keeper of a thousand memories, every stain, every indent, every old pair of knickers pulled out from behind a cushion…

Have you engaged in other creative activities with people living dementia before this show?

Earlier this year I completed training with Arts 4 Dementia in order to lead theatre workshops for those with early stage dementia and their carers. What struck me about the training is the assumptions we make about those with the illness, an idea that has weaved its way into Sofa. From that training I developed the ‘I AM’ workshop – preserving identity through drama and story sharing, which was trialled at ‘The Reawakening Festival through Arts 4 Dementia’ in May this year. The response was very encouraging and we met some fantastic characters whose enthusiasm to express themselves, their self-identity and their fears was really rewarding. Having said this, it was a struggle to gain trust from the dementia community in the first instance and continues to be a challenge as the project develops. We are working hard to tackle the hurdle and as we pick up support from various bodies along the way.  We have faith that delivering the workshop will be a lot easier in the future.

Sofa and the associated workshops are based on real life experiences and stories. Can you elaborate on this?

As artists it’s very hard not to create from your own experiences and, as such there is a strong autobiographical thread running through Sofa. Laurence and I spoke at length about the reality of bringing our personal experiences to the stage and gave each other a lot of permissions on what was and wasn’t too close to the bone. Laurence’s father had Parkinson’s and Parkinson’s related dementia. My Grandmother had Alzheimer’s and lived with my family throughout a large proportion of it.  So, yes we have a lot of first-hand experience.  I suspect it would feel odd if we tried to tell this story without it.  Like it’s not our place. We also opened the research out to others and have had some great stories back in return, the anecdotes are always told with tears and smiles, just as a good memory should.

For me success is defined by all the little mini goals reached along the journey; meeting new creatives, having a puppet that doesn’t fall apart in rehearsals, working with great mentors, achieving support from others to champion the play and the workshops. In terms of the long game, it’s definitely about confronting and breaking down the stigma of dementia by looking at the playful role of memory. The workshops can go on to have a life independent of the play and I believe there is no end to the good they can do, especially in reaffirming self-identity. If another performance sprouts from it in a few years time then I’d love to delve deeper into what the world of memory and dementia has to offer!

You are touring your show The Children in the Moon in the summer of 2018.  Would you like to say a few things about this show?

Yes! So, alongside more challenging pieces of theatre like Sofa, my passion for storytelling and fairy tales sees us creating a family show that tours festivals and theatres throughout the summer months. Next year’s offering is The Children in the Moon, which is loosely based on the story of Jack and Jill, but woven together with snippets of other age old nursery rhymes and folk tales. It is brought to life by a giant teapot of tales which opens up to reveal a magical table top puppetry stage. As with all our work, the narrative hints towards important issues faced in today’s world, The Children in the Moon looks at diversity.  Our last family piece Fox and Rabbit’s idiot’s guide to The Owl and The Pussycat championed the plight of bees, and we handed out wild flower seeds, in association with Friends of the Earth, as part of the performance.

I like to try and end on a positive, motivational quote from successful artists where I can.  What good advice would you now offer to either your younger self or to any new and emerging artists who are just starting out on their career hoping to achieve the success you have ?

Always look for new creative ways to develop and deliver your work, make connections and never stop learning. The world is rich with ideas, stories and characters waiting to manifest themselves through your work so never stop searching. I have a notebook full of stories and ideas that keeping tapping me on the shoulder asking if it’s their turn yet. But it’s also about focusing in and concentrating on one thing at a time; I would’ve told my younger self to do that a long time ago, I often have to remind my adult self.

Interview by Stephen B Watters

To find out more about The MakeShift Ensemble and to get details on 2018 tour dates for Sofa and The Children in the Moon visit their website:  www.themakeshiftensemble.com, and join them on Facebook and Twitter.