Caroline Partridge is an experienced actor and successful puppeteer, specialising in hand puppetry.  In this interview, Josh Elwell chats with her about her performance in the ENO/Improbable Opera Production of Satyagraha, currently in Los Angeles. 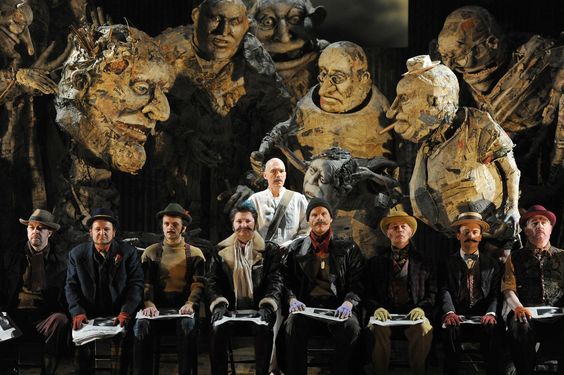 You are a multitalented performer, actress and puppeteer and have worked with a wide spectrum of companies from Little Angel to CBeebies to English National Opera. How did your interest and career in puppetry begin? How did you develop and build your skills as a puppeteer?

I suppose my interest in puppetry began when I was at school. I elected to make a marionette for one of my A Level Art papers and the creation of that puppet, (Don Quixote), led me down a wonderful road of discovery. I became totally immersed in researching the best way to construct a marionette, and how to create a show, which inevitably led me to the Little Angel Theatre in Islington.

I clearly remember my first visit in 1988, and the first show I saw there, ‘The Little Mermaid’, a beautiful marionette piece which, 30 years on is still being performed I’m happy to say. Funnily enough my puppet was sent to the Little Angel to be marked and the Little Angel was the first place I got an acting job after leaving drama school. I have a lot to be grateful to the Little Angel for, I consolidated my skill as a puppeteer there and became involved in teaching puppetry in many of their educational projects.

You were part of the creative team that developed the award-winning Opera of Satyagraha by Philip Glass presented in a staggering visual collaboration between The English National Opera and Improbable – charting the early life of Gandhi in South Africa. You have been working as a puppeteer on the production over several years. What was it like working on such a large-scale opera piece and what was your main involvement at the start?

I am so immensely proud to have been involved in this production from the start. It really has been a life-changing experience, not only in terms of the success of the show but how the work has influenced my life and relationships.

I had desperately wanted to work with Improbable since I saw their production of Shock Headed Peter and was totally blown away by the humour, ingenuity and freedom of their work. I found out that I’d been chosen to be part of the Skills Ensemble, helping to create the visual language for the show, as well as build the puppets that have become such an influential part of the opera and it was the realisation of a big ambition for me.

On this show I have been privileged to work with some of the most uniquely talented, warm, generous and funny people over the last 11 years and count them as some of my dearest friends. As clichéd as it might sound, the stars aligned and the right people came together at the right time to inject their expertise, experience and love into this beautiful piece of work that it has defied all expectation and has been running revival after revival both here and in the US for over a decade.

Satyagraha was Improbable’s first staging of an opera and because of this Phelim McDermott and Julian Crouch, the then Co-Artistic and Creative Directors were incredibly open to experimentation and play. The combined approach of Phelim’s unique directing style and Julian’s dazzling design complements Glass’s epic score beautifully and made them a joy to work with. 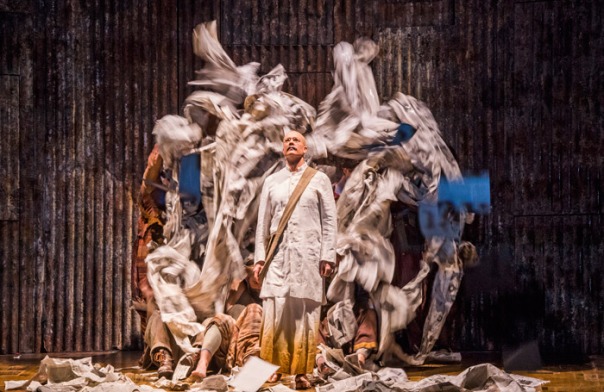 The Ensemble in Satyagraha play an important role within the piece. Can you tell us from an ensemble member’s perspective how this feels? Also, how has this group creatively grown or developed over the last few years?

It’s funny but I don’t really know if I can justly distil down and quantify how it feels to be part of the Skills Ensemble within the show.  The simplest way to describe what we ‘do’ within the piece is to say that we not only create, and constantly re-create the beautifully fluid stage pictures, but how it feels.

Well I suppose you feel responsible and aware of the mechanics involved in the performance and the importance of making things ‘work’ but there is so much more. There is this extraordinary all-consuming combination of music, movement, atmospheres, and feelings that transport you to a place where you are not acting but ‘being’ – being totally present, and responding truthfully in the moment. It’s a very freeing and special place to be as a performer. I think this maybe one of the reasons why the original Skills team have always returned to the show over the last 11 years.

You are just about to embark on taking the show to LA. How have different audiences responded to the piece and how do you expect it to be received in LA?

Wherever we have performed the show, London, New York and soon to be L.A. audiences, especially those new to opera have loved it. The themes within Satyagraha always seem to resonate with what is going on within the political & societal climate, the Global Economic Crisis of 2008 & 2013, Occupy Wall Street in 2011 and now with Brexit and Trump, and the rise of segregation.

It can be said that some people find Philip Glass’s work a struggle because of the repetitive nature of the music but for others this is where the joy lies. The joy in being able to let go, to release, connect and be carried to where your higher self wants you to go, to be completely present. This is why many thousands of people who have seen the show keep coming back. At first glance it may seem daunting as the opera is 3 hours long, sung in Sanskrit and has no subtitles.  But this allows the audience the time and space to fully connect with what is going on musically and visually.

Many people who have seen the opera compare it to a beautiful meditation. After one of the London performances a friend who was present said she felt it was like “being carried along by a spiritual river”. I think it’s a very personal and moving experience and I’m sure that the L.A. audiences will feel the same.

I can let you know for sure at the end of October. 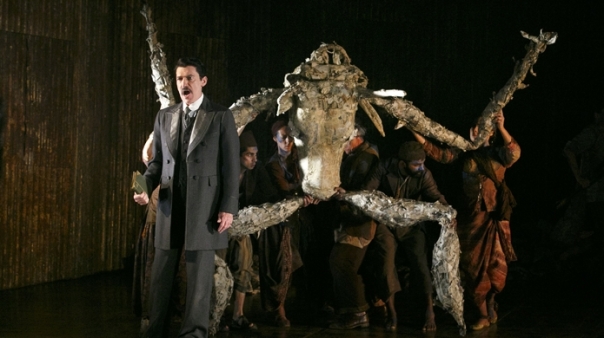 Satyagraha is at the LA Opera House until 11 November