Heather Henson’s ‘Hand Made Puppet Dreams’ is now live on Amazon Prime. This is an eclectic collection of selected puppet shorts brought to you by IBEX Puppetry, Heather’s personal project. She has certainly produced one of the most diverse puppet film selections that you will see anywhere. And she clearly has a flair for seeking out some of the United States’ finest, and at times most peculiar, handmade puppet film makers!

There is a huge amount of diversity; from the most beautifully and carefully crafted to the epitome of homemade. There are clear stand out films that are a ‘must watch’ for any puppet film enthusiast or aspiring film maker and there are others that prove that with a camera and a sock puppet anyone could be the next Spielberg!

One of the most extraordinary is ‘Junk Palace’ directed by Lyon Hill. Based on a macabre true tale of two brothers whose hoarding takes them to the extreme. The craftsmanship of these elaborate paper cut-outs is breathtaking and the perfect balance of a gripping story and a striking visual style draws the audience into the darkness of its soul.

Another exceptional piece is Sam Koji Hale’s ‘Yamasong’.  This is short film made prior to the full motion picture is surreal, elemental and disturbing in equal measure. With a masked patchwork girl and a tortoise fisherman chasing a fallen star! I’m looking forward to seeing more work from Sam in the not-so-distant future. 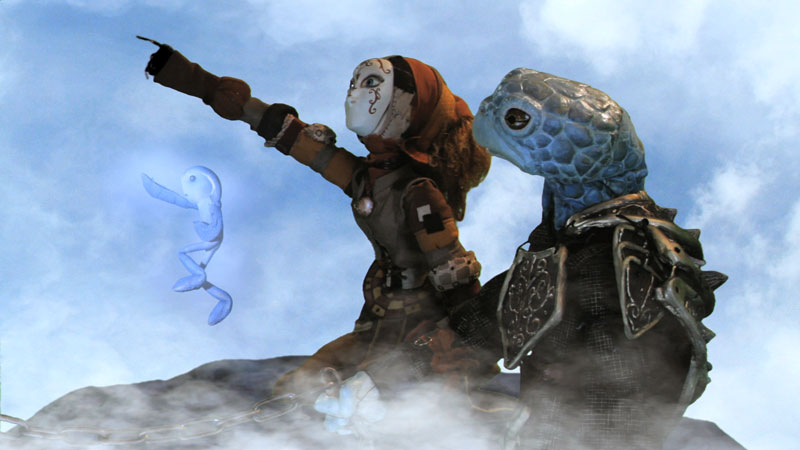 Toby Froud’s ‘Lessons Learned’ is magical and sumptuous. With a real flavour of Henson’s ‘Dark Crystal’ (Toby was production designer on the recent Netflix series) and the haunting atmosphere of Dartmoor National Park. This is a story of a boy whose inquisitiveness gets the better of him and falls into a world not intended for him. Striking design, a poignant narrative and expert puppetry make for rich viewing.

There are others in the series that are curiously creative and oddly beguiling like ‘The Narrative of Viktor Karloch’, voiced by Christopher Lee and Elijah Wood. Kevin McTurk’s film has a dark and sinister tone and, with haunting doll like puppets, coaxes us into the genre of puppet horror. ‘Harker’ and ‘Melvin the Birder’ deserve attention, and it is also worth checking out ‘Crane and Tortoise’ to see some beautifully executed puppetry.

Others in the series left me a little bemused but one thing is for certain – it is fantastically inspiring to see puppetry used on screen in so many diverse ways.  Wouldn’t it be exciting to see more ‘Handmade Puppet Films’ and perhaps even ones made here in the UK? Hey UK puppeteers! How about it?!

Handmade Puppet Dreams is available to watch on Amazon Prime now.  To find out more about the series and IBEX Puppetry, visit the website: www.ibexpuppetry.com