Claire Lamond is a Scottish BAFTA nominated stop motion animator and filmmaker based in a dark cupboard in Edinburgh.  She is drawn to stories of small happenings that reflect wider society and has worked with community projects animating their stories.  I caught up with Claire at the 2018 Manipulate Festival to find out more about her work and influences. 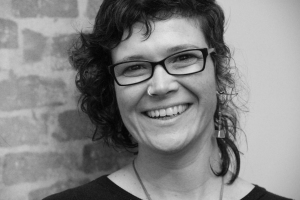 How did you get involved in animation, and why stop motion?

Some years ago I was ill and had to give up my job as a youth worker. I was introduced to art initially as a therapeutic process but ended up going to college to take it further. I was doing illustration but found that everything I wanted to do took place over time so that, coupled with my love of film and stories, led me to study animation at Edinburgh College of Art.

Stop motion has a particular appeal to me. I love the thrill of creating something that is gone the minute you move onto the next frame, never to be repeated. Although I use computers for capturing my frames and After Effects, I mostly love the tactile interaction that exists between puppet and animator when we’re working together in the wee dark room of my studio. I think stop motion has a lot in common with working with puppets in real time…just much much slower!

After my degree film ‘All That Glisters‘, adapted from a short story by the achingly great author, Ann Donovan, I was offered an animator in residence at National Mining Museum Scotland, where my remit was to make a film inspired by the collection. What a dream that was! I ended up interviewing the ex miners who work there about their first experience of going underground and their response to the closure of the pits under Thatcher’s orders. ‘Seams and Embers‘ resulted. I like that objects as well as puppets can be characters and here the ‘piece tin’ (or sandwich box) plays it’s part because the men talked about how opening their tin and having a piece of home down in the mine was so important to them.

My next larger piece, ‘Sea Front‘, was another museum based collaboration between myself and Fife Cultural Trust to make a film about World War I. Having focused on men in the mining museum, I wanted to create a story from my research that focused on women and children’s experience. I’m a bit of a geek for research and there are 173 facts from the time couched somewhere in ‘See Front’! It was fantastic to work again with my pal, Karine Polwart, to create the score. She’s a bit of a geek herself and created something beautiful based on pipe tunes of the time.

These are my main films but I have also worked with organisations such as Edinburgh Development Group and Disability History Scotland to create work for them and have just finished a music video for Glasgow artist Richard Luke working in shadow puppets which was a really lovely, peaceful process.

You use materials with a lot of texture, and this seems particularly apparent in your short film, ‘Seams & Embers’.  What does this aesthetic lend to your narratives?

The making process is a joy for me. I keep old clothes and source specifics bits of fabric from charity shops. Stories in films capture characters at one moment in their lives but I want it to appear as though they have had a history. That they have a ‘lived in’ look. It means everything looks a bit tatty, but so do we all. Sometimes I choose textiles for a specific reason. I tend now to make my puppets’ skin from nylon tights. This started when I was making ‘Seams and Embers’ and found out that nylon was a by-product of coal.

My choice to use textiles is also a nod to women in particular’s rich history of craft. I was sent out of my sewing class at school because I kicked against doing something so ‘girly’…it’s amuses me to think how much I use fabrics and sewing now! The film I’m working on just now pushes this side to my work even further because absolutely everything is made out of fabric and threads.

You have significant experience in community work and continue to work with young people, sometimes from challenging backgrounds, using animation.  Can you tell us about this?

There is nothing more magical than watching someone press ‘play’ when they have just done their first second or two of animation – that ‘I’m a wizard!’ moment that even the most cynical or withdrawn person or someone with significant additional needs experiences. Often the people who are struggling the most in other aspects of their life or in the setting they find themselves in are the ones who gain the most from creating things. Using art forms to connect with people is such a powerful way of working. I think humans are natural storytellers, so running workshops is as much drawing this side out of people as it is doing the animation.

At the moment I am working on stage visuals with singer/performer Mairi Campbell on her next show (having created the visuals for her first show, ‘Pulse’ two years ago). It’s lovely to be collaborating with a wide creative team.

By contrast, I have also just finished the making-stage and am about to begin animating my own stop motion film adapted from a story that my oldest daughter wrote about what she has learned from her sister’s unusual way of looking at the world (as well as a beautifully unique slant on things, she has autism). It feels like a very internal, personal and quiet space to be working in.

In terms of the future…well…funding….need I say more….but I hope I will be able to make more stories that are small but tell something of wider society – that’s where my love lies.

To find out more about Claire’s work, visit her website: www.clairelamond.com , Facebook and Vimeo Channel.  Read about her work in progress on her WordPress blog: https://clairelamond.wordpress.com