‘Projection: First Light’ is a new game in development by Shadowplay Studios (and published by Blowfish Studios) which follows the adventures of Greta, a girl living in a mythological shadow puppet world. We spoke to the game’s designer, Michael Chu, about the forthcoming puzzle platformer that will explore the history and global culture around shadow puppetry.

‘Projection: First Light’ is a shadow puppet adventure about light manipulation, curiosity and lost art.  Can you tell us about the background to the game – how did you come up with the idea and why did you decide to use shadow puppetry?

A game jam I attended had the theme “So close.” I was reminded of times I would put my hand close to a ceiling light in my home and have fun making shadows. I made the first round of Projection here, and the shadow puppets lent themselves naturally to a game mechanic about manipulating shadows. It wasn’t until Global Game Jam that I made a prototype of the mechanic which we see in the game now. The prototype got people excited and so Yosha and Jared joined me.

The visual aesthetic for the game draws on a wide variety of art styles from Indonesian to Turkish and Chinese shadow puppetry.  How did you research this?

The first iteration of Projection drew heavily from Lotte Reiniger’s art style. Moving forward though, we visited shadow puppeteer Richard Bradshaw, who gave us a run down of how we should explore the different worlds in the order: Javanese, Chinese, Turkish/Greek, and 19th Century European. He gave us a tour of his workshop and we recorded a lot of footage with how the shadow puppets moved. He also spent about 5 minutes to make a simple puppet for our artist to reference. Since then we’ve just been watching a lot of shows online and looking up the traditional art styles. We also read up closely on the stories to try capture the themes and morals, and not simply have the characters plopped into the game. After all we didn’t want to misrepresent the characters.

We have a couple of challenges that we’ve set up for ourselves. The puppets we reference adhere to proper shadow puppet physics, so for instance, the Javanese puppets do not have moveable leg joints. So we make them hobble side to side to replicate this movement. We also have no dialogue in the game and try tell as much through animation as possible. One last problem we’ve come across is the black and sepia colours of a traditional shadow puppet canvas. Unfortunately this seems to be a popular look for many Indie games, so we’ve tried adding more background colours since technically you can have coloured sheets as backing.

We’d like people from any background to be able to hop on and play the game, and we’d like to think there are 3 core pillars to differentiate our game:

1. Unique shadow mechanics – Shadows are a natural phenomena that everyone understands, but it adds so much complexity once you give it physics.

2. Art Style – Shadow puppetry is a world heritage art. There is appeal in exploring something familiar which hasn’t been seen in great detail. It’s given us a chance to explore our own cultures!

3. Narrative – We’re exploring the stories of epics from different cultures. We like to think we’re helping pass on these stories through an interesting medium. 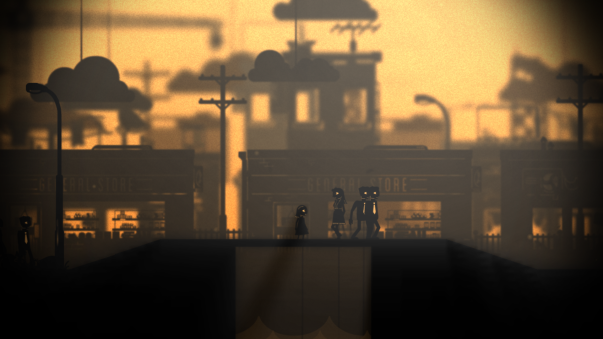 The shadow puppets came after the shadow mechanics, so we weren’t really influenced by other games, but by design of what made sense.  I have seen games which use puppets, but I haven’t seen shadow puppets. There are also games which use shadows as an interesting mechanic, but I don’t think there’s a game which uses shadow physics like ours. That said, the amount of video games out there now is staggering, so I wouldn’t be surprised if someone linked me a shadow puppet game.

We’re aiming for Q2 this year, but please be gentle if we miss our mark.

Find out more about Shadowplay Studios at their website shadowplaystudios.com and development blog shadowplaystudios.tumblr.com.  Keep up-to-date with the latest on ‘Projection: First Light’ via Facebook and Twitter.